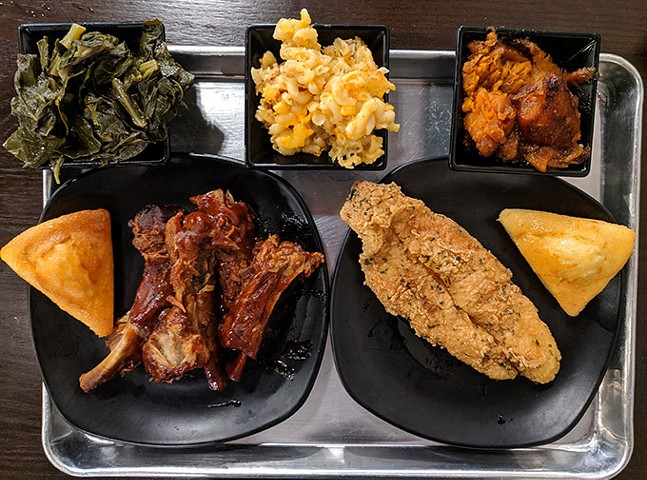 Walmart is not generally known for culinary prestige. But at the superstore’s location in West Mifflin, this is changing, thanks to Adenah Bayoh and Elzadie “Zadie” B. Smith.

Bayoh and Smith are the owners of Cornbread, a “farm to soul” restaurant that moved into the Pittsburgh Walmart in early July. The unexpected location for the partners’ New Jersey-based soul food eatery is planned to be part of a superstore trio, with locations in Greensburg and Tarentum coming soon.

Until recently, a Walmart dining experience mostly involved fried fast food. But when the megastore was turned on to the fast-casual fad, things changed. Walmart began partnering with smaller, trendier restaurants, which opened the door for counter-service restaurants, like Cornbread, to move in.

If I hadn’t been staring at a sign that read, “Save money. Live better.” while eating at Cornbread, it would not have been obvious that I was inside a Walmart. The space feels like a world away from the navy and yellow fluorescent aisles. Dark, hardwood floors give a cozy feel to turquoise-studded booths. The welcoming wall displays a mural filled with words the owners connect with the eatery: high quality, sustainable, farm, and soul.

The menu is divided into combos, large and small, with a few special combinations running for $7.99. Each meal deal offers a different combination of meat — fried and barbeque chicken, ribs, fried fish — and sides, which included everything from yellow rice to cabbage (cornbread came with every option). Chicken and waffles, a fish po’boy, and peach cobbler finish off the list.

The entire ordering process was completely automated; I didn’t speak to anyone until after my food was delivered, when I had to ask for a fork. The “fast” portion wasn’t quite there yet (which was partially due to my fish, which was fried to order). The line doubled in size while I waited for my food, but soon enough, a giant tray of fried catfish, ribs, mac n’ cheese, and yams was delivered.

The catfish was a picture-perfect image of what fried fish should look like. It wasn’t weighed down with grease, and the inside of the filet was flaky and moist, not overpowered by the spiced breading. No sauce was needed. Ribs, though a bit fatty, fell further off the bone the longer I let them sit and were drowning in a thick, sweet barbeque sauce.

As a mac n’ cheese skeptic, I was pleasantly surprised by Cornbread’s version. It was seasoned well and peppered with pleasant pockets of baked cheese. The yams could have been a dessert; I nearly mistook the dish for pumpkin pie. Cornbread, Bayoh and Smith’s signature dish, came in puffed-up triangles. It was nothing out-of-the-ordinary, but simple and refined.

Bayoh and Smith opened the first Cornbread — as a standalone restaurant — in 2017. Bayoh was not new to restaurant ownership (she purchased her first at 29) and Smith, who owns multiple early childcare centers, had always been passionate about soul food. The two self-starters built Cornbread on what was important to them: gathering with friends and family while eating good, authentic food that’s ethically and sustainably sourced.

If you’re in need of something bigger than a large combo, Cornbread has family-sized meals.

Cornbread had a selection of specialty drinks, including the Southern twang, sweet tea, and uptown. I went with the uptown, a cross between mint tea and lemonade.

This popular hymn lyric is both a pun and a testament to Bayoh and Smith’s fantastic soul food.

Is Pittsburgh vulnerable to fracking-induced...

Police Are Looking For A Missing 84-Year-Old...