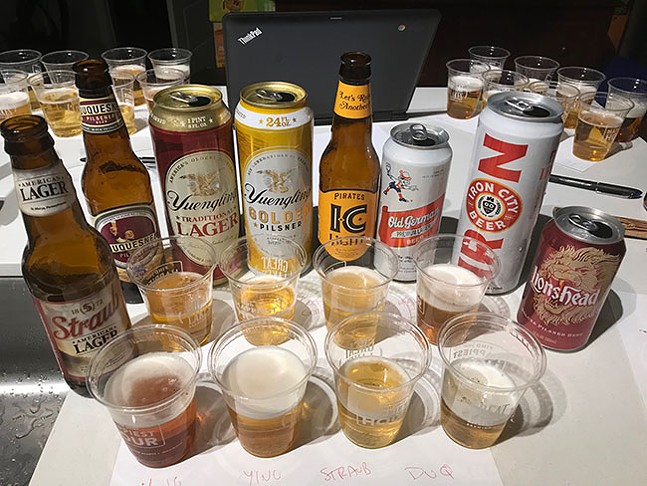 It’s great that small breweries are opening up everywhere, owned by community members with a focus on local ingredients and revitalizing business districts. That being said, there’s no denying that craft-beer exhaustion is upon us, as the explosion of craft breweries doesn’t mean all the new beers actually taste good. And when you pay top dollar for a bad beer, it makes sense to slink back into the idea that beer should mainly be refreshing, cheap, and get you drunk.

With that in mind, Pittsburgh City Paper presents a definitive ranking of the best inexpensive, Pennsylvania-brewed beer available in Pittsburgh. CP commissioned (aka asked three willing friends) to taste and rank eight lagers (yes, pilsners are technically lagers) that are all brewed in the Keystone State and can be purchased for less than $1 a beer (when bought in cases).

This pilsner had a strong aroma and a good amount of sweetness from a strong malt profile. It tastes the most like beer and the least like water. It was the clear winner with three first-place votes and one second place.

Wheat and grain dominate the nose of this lager, begging a crisp swallow. And it doesn’t disappoint with a very refreshing, light, and flavorful finish. Everyone had this beer in their top two.

The surprise of the group. This Bohemian pilsener is light, a bit wheaty, and drinkable, but still has plenty of beer aroma. Everyone ranked this third.

Not an amazing aroma, so drink this lager out of the can, but the flavor is oddly addicting and balanced. Old German goes down smooth.

Light and just a hint malty, this lager was described by one panelist as “bland, but inoffensive,” a pretty good beer for drinking in large quantities.

The darkest of all the beers with a roasted malt flavor. But it’s a bit too roasty with an off-putting aftertaste. Also, Yuengling is vehemently anti-union, which left another bad taste in our mouths.

Though a Pittsburgh favorite, this very bland lager just didn’t hold water to the other inexpensive beers. It does taste mostly like water, though.

This relatively new offering from Yuengling is a bit skunky but had some interesting Belgian-style notes. But that’s exactly why the panel rejected it: The flavors don’t work.