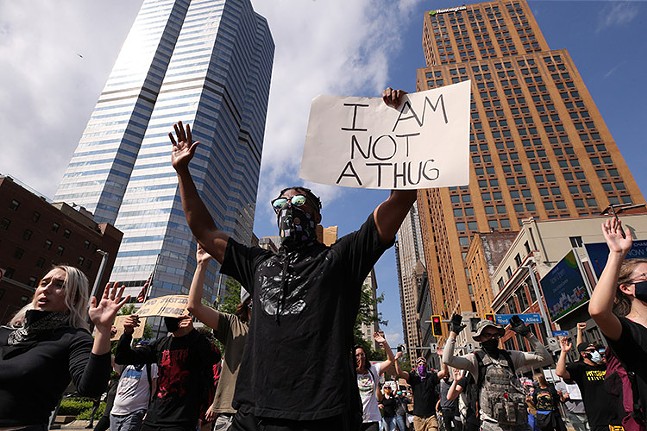 Today, a group of about 300 protesters marched from Downtown to the Allegheny County Jail and then on to South Side in a peaceful march that ended without incident.

The march was led by the group Pittsburgh I Can’t Breathe, a grassroots organization that was recently created in response to the death of George Floyd, a Black man killed last week by a Minneapolis Police officer, and Breonna Taylor, a Black woman killed in March by police in Louisville. This marked the fourth consecutive day that large crowds held demonstrations in Pittsburgh to condemn police brutality against Black people.


Unlike events tied to demonstrations on Saturday and Monday, today’s march had no confrontations with police and no arrests. The gathering started in Market Square and then marched to the Allegheny County Jail. Marchers appeared to be a bit skeptical of police officers, who were clearing out traffic in front of the march on the way to the jail, but marchers never confronted police.

Just outside the jail, in front of the Pittsburgh Municipal Court building, a large cavalcade of police officers in riot gear were stationed.

When the marchers arrived outside the jail, they staged a short sit-in, and gave speeches. Dasia Clemons told the crowd that Pittsburgh I Can’t Breathe says that more than 3,000 people have joined the group in just a matter of days. She referenced the brutality that had occurred against Leon Ford and also spoke about the need for unity and equality, even in protest.

“Hate is too heavy of a burden to carry,” said Clemons. “Let that shit go.”
After the sit-in, the marchers traveled across the 10th Street Bridge over to Carson Street in South Side, and then eventually returned to Market Square. State Rep. Sara Innamorato (D-Lawrenceville) joined the crowd for the majority of the march.


When the protesters arrived back at the square, a speaker told them the plan was to disperse peacefully and there were no plans to continue protesting. The speaker said Pittsburgh I Can’t Breathe is planning another protest for Sun., June 7.

Before the crowd fully dispersed, Pittsburgh Police officer Jonathan Bradford spoke to the crowd and said he was supportive of the movement, and that what happened to Floyd was wrong. “I am a Black man in a blue uniform, and we at the Pittsburgh Bureau of Police want you know that we support you and we are with you,” said Bradford, who is with the civil division, which is in charge of helping to guide and protect protesters.

Bradford also said that if asked, he would personally kneel with protesters, but couldn’t comment for other officers. When asked later about the Pittsburgh Police’s role on Monday night, in which officers fired tear gas and rubber bullets first at protesters marching down Centre Avenue, Bradford said he was not inclined to discuss that matter.