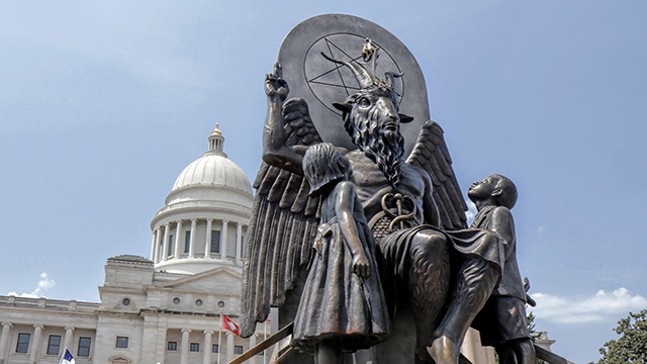 If you are not a Christian, then the Christian parts of American government really start to stand out. The country’s pledge of allegiance states “one nation under God” and its paper money reads “in God we trust.” The pervasiveness of Christian dogma in state matters is the main grievance of The Satanic Temple in the documentary Hail Satan? In the midst of its fight against Christian supremacy, the Temple builds a following bigger than anyone expected.

In 2013, a group calling themselves The Satanic Temple held a rally endorsing then-Florida Gov. Rick Scott. They held up a large banner that read “HAIL SATAN! HAIL RICK SCOTT!” It was a stunt to troll Scott, who had recently tried to implement prayer in public schools. Nowadays, Temple members take themselves more seriously and wouldn’t pull a fake endorsement stunt, but that was the early days, before they’d established themselves as a legitimate organization. As the group drew more media attention, the Satanic Temple began to attract more and more followers who felt they finally found a place to belong.

The Temple doesn’t actually worship Satan, but instead finds a thrill and righteousness in rebelling against the authority and tyranny of Christianity and God. As one Satanist puts it, “Blasphemy is very much a declaration of personal independence.” They frame God as a corrupt authority and view Satanism as activism. In addition to more media stunts, like having a gay couple make out atop the grave of the mother of Westboro Baptist Church leader, Fred Phelps, they also do earnestly good work. As Satanic Temple chapters pop up across the country, the groups adopt highways and beaches to clean, start after-school programs, hold blood drives, and collect menstrual health products with an event called “Menstruation with Satan.”

They identify, not as “anti-Christian,” but as “post-Christian.” In addition to covering the formation of the Temple and the history of the “Satanic panic” of the ’80s and ’90s, the central focus of Hail Satan? is the debate over the Ten Commandments statues that sit in front of state capitol buildings in Oklahoma and Arkansas, among other states. Politicians and supporters insist that the commandments are non-religious, and in response, the Satanic Temple sets out to construct a statue of Baphomet, a creature of Satanic symbolism, to be placed next to the commandments. The piece they design has the head of a goat, a torso modeled off of Iggy Pop, and two children gazing up in adoration. Like everything the Temple does, it’s wry but with serious intentions.

Director Penny Lane paints a picture that is almost obvious in its contradiction. “Can you believe that these Goths are actually smart people trying to do some good?” is a theme that runs throughout, but because there are so many people who really don’t believe such a thing is possible, it never comes across as condescending. She splices together interviews with leaders and members of the Temple with frenzied news coverage. The film also employs a hearty number of scenes from movies and daytime talk shows about Satanism, relishing in the fiery, hysterical imagery.

Mostly, Hail Satan? raises questions that put the onus on politicians, media, and churchgoers to question their actions. Why did the Archdiocese of Boston lead a protest against the Satanic Temple instead of reflecting on the church’s own documented evils? Why are the Ten Commandments statues so important to people when they were originally a promotional gift from Paramount Studios? Why is the separation between church and state not defended as aggressively as the other amendments?

If you’re looking for a place of belonging that aligns with radical but earnest beliefs, then Hail Satan? might work as a recruitment film. For everyone else, it will simply restructure the way you think about God, government, and goats.