Home /
Local News /
Getting out the vote in the time of coronavirus: Young advocates transition to digital organizing

Getting out the vote in the time of coronavirus: Young advocates transition to digital organizing 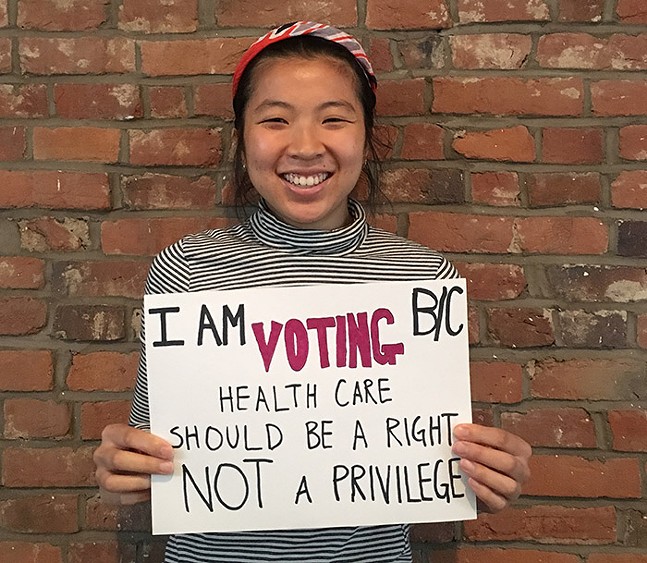 Empty streets. Shuttered businesses. An uncharacteristically quiet city. In the midst of the coronavirus pandemic, this has become the new normal — a life lived online, if only for the time being.

But that hasn’t stopped NextGen from soldiering on in its mission to organize young people at the polls.


According to State Director Larissa Sweitzer, Hana Koob, an organizer in the Pittsburgh area, and NextGen’s Pennsylvania Press Secretary Sarah Eagan, the local coalition has followed its base to the web, making the transition from face-to-face activism to a digital-centric interface.

“We have 32 full-time organizers in Pennsylvania, so we’ve all been transitioned in this period to doing some online digital organizing," says Koob. “We’ve been mostly doing this through a few different tactics: texting, phone banking, as well as some social media campaigns to reach out to young voters. When we send texts, when we make calls — we’ve been reaching out to young people across the state of Pennsylvania.”


With teams on the ground in 11 battleground states including Pennsylvania, Iowa, New Hampshire, and Maine, NextGen’s mission is to mobilize voters ranging in age from 18 to 35 — a demographic Koob noted will be the largest voting bloc in the presidential election later this year. Under normal circumstances, organizers, volunteers, and fellows come out to college campuses to speak with students face-to-face, registering them to vote at their university addresses, offering opportunities to sign various petitions, and encouraging them to get civically involved.

“[Usually] we start talking to them on the ground, and then we transition them to online/digital organizing ... and then [meet] them back on their campus on the ground,” she said. “When you’re organizing someone face-to-face, you’re able to develop a connection that maybe you wouldn't be able to replicate online. [But] we’ve actually been transitioning the one-on-one conversations to Zoom.”

Using Zoom, a web conferencing app favored by universities and businesses alike in the wake of stay-at-home orders and self-isolation, the NextGen team has been able to have the same face-to-face conversations they’d typically have in-person via the internet. All of this, Sweitzer says, has helped to make the transition to digital organizing “very smooth.”


Most young people already have a strong online presence, she adds, which has made the task far less daunting.

According to Eagan, NextGen has also created a primary guide for the state, aimed at keeping folks updated with changes in registration and election dates. The guide includes information on polling locations, registration statuses, and other information one ought to know prior to showing up at the polls.


Koob said they’ve texted more than 190,000 young people so far, encouraging them to register for mail-in ballots and ensuring that they know the new dates of the primary elections.

“We just really want to empower young folks, and we want them to know that they have a voice and that they really have the power to make an impact. We as 18-35-year-olds are going to be the ones who are impacted by policies that are enacted or not enacted right now,” Koob says. “We are the ones who are going to deal with the legacies of what’s going on right now in the government, so we have to vote for candidates and policies and ideas that we believe in because we are going to deal with the impact throughout our lives.”

She also says it’s important for young people to hold the current administration accountable for its inaction and mishandling of the coronavirus pandemic.


“In voting for people we believe in, we can really see the change we want.”

An inmate in the Allegheny County Jail has...