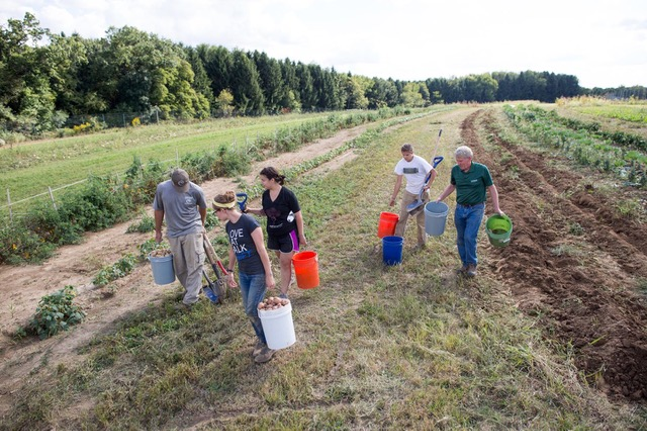 Students at Chatham University’s Falk School of Sustainability and Environment, located at the Eden Hall campus in Gibsonia, Pa., are no strangers to the world of farming. Eden Hall boasts nearly 400 acres of green space, which is often used to help students get hands-on experience with food and agriculture, water, natural energy, air quality, climate, and natural systems.

Now, students at Eden Hall are growing a wide variety of crops for local communities in need through a partnership with the Greater Pittsburgh Community Food Bank’s Green Grocer mobile farmers market program.

This farm is fully funded by the food bank, which also manages delivery logistics, funds an internship program for the farm, and recruits volunteers.

Another sustainable detail of the Eden Hall campus is its solar high tunnel. Heated by a solar thermal system, the tunnel will allow students to grow vegetables for the food bank all year round. Earlier this year, Eden Hall students seeded onions and Brussels sprouts in the solar high tunnel. As the season gets warmer, students are directing more seeds into the farm plots.

“We’re proud to support the Green Grocer program, which is so vital for our local communities who don’t have easy access to fresh, healthy food in their neighborhoods,” states Tony Miga, Eden Hall’s farm director, in a press release. “Our goal on the Eden Hall farm is to make sure everything we do either benefits local food production, Chatham academics, or the regional community. The Green Grocer program does all three.”

Miga believes that the Food Bank Farm exemplifies Eden Hall’s initiative to show how farming can have a positive impact on the land and resources under human stewardship.