Catch The Golden Girls in puppet form at the Byham Theater 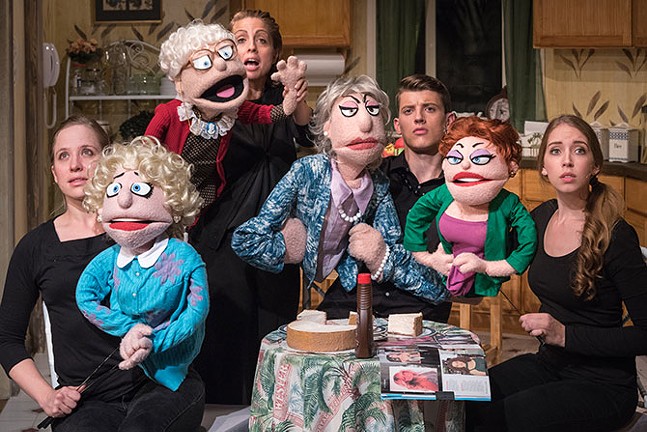 The puppets and puppeteers of That Golden Girls Show!

Everyone knows the story of The Golden Girls, even if they haven’t seen much of the hit show. Four older puppets share a house in Miami and navigate sex, money, and aging, getting into all kinds of shenanigans along the way. Wait, that’s not right. Sorry, the original series starred four human women, but That Golden Girls Show! A Puppet Parody does star Rose, Blanche, Dorothy, and Sophia living their lives in puppet form. The show comes to the Byham Theater on Oct. 11 and 12.

The show first premiered in New York in 2016 and has been touring around the country ever since. It features the four muppet-like puppet-characters along with their puppeteers on-stage to combine classic jokes and references with new writing.

“There’s something so specific and special about the cast of women that originated Dorothy, Sophia, Rose, and Blanche. [Those are] some huge shoes to step into, and the puppets help us do that,” says director Michael Hull. “In addition to learning lines and practicing the show, our cast spent hours watching original episodes of The Golden Girls so that they could study what makes each character so unique and memorable.”

The puppets each share distinct physical features with the original characters exaggerated into a more cartoonish form; Rose’s blonde hair is even blonder, Dorothy’s eyebrows pointier. The kitchen, though, remains mostly the same.

“Puppets provide a heightened sense of reality and encourage the imagination of the audience,” says Jonathan Rockefeller, producer and co-creator of the show. “Puppets also allow us to exaggerate the traits and nuances of the characters.”

While the show obviously caters to longtime fans — the tagline on its website reads “calling all girls, gays, and grannies” — it’s also a good vehicle for bringing newcomers into the fold.

“If you're a die-hard Golden Girls fan, we challenge you to find all of the little details and Easter eggs that have been worked in there for you,” says Hull, adding that “the goal was to create something that would appeal to longtime fans as well as newcomers who are meeting the fab four for the first time.”