Home /
Local News /
A beer for every neighborhood, the closing of a beloved Pittsburgh restaurant, and more food news

A beer for every neighborhood, the closing of a beloved Pittsburgh restaurant, and more food news

What is an indigenous food system?

This is the question asked by Chef Sean Sherman, founder of The Sioux Chef and author of The Sioux Chef’s Indigenous Kitchen, who will present “The (R)evolution of Indigenous Food of North America” tonight at the August Wilson African American Cultural Center. Tomorrow, the chef showcases a four-course menu at The Westmoreland Museum of American Art.

Sherman is an accomplished chef with over 30 years of kitchen experience under his belt. But there came a time when Sherman says he “could name hundreds of European recipes, but really could only identify a few Lakota recipes.” So he turned his focus to indigenous food.

“It’s really looking deeper at your own region,” says the chef, “and how people survived there for thousands of years before Europeans.”

For his dinner at The Westmoreland, Sherman will present courses based on Native American traditions and techniques. He cuts out European ingredients — like dairy, flour, beef, pork, and chicken — and relies on wild plants. Courses do not imitate indigenous recipes; rather, Sherman interprets them through a modern lens.

Take the first course of his menu at The Westmoreland for example: pine and white bean soup, cedar-stewed turkey, squash broth, and dried ramps. It showcases the region’s conifer and heirloom flavors, with a touch of creativity from the broth. Ramps are wild onions, and Sherman preserves them traditionally by drying them. The dish is clean and simple, converging indigenous methods with modern ideas.

Sherman’s four-course meal is sold out, but there are still tickets left for Sherman’s talk tonight at the August Wilson Center. Visit thewestmoreland.org for more information.

A beloved Pittsburgh restaurant is closing its doors. Casa Reyna, a Strip District Mexican restaurant and grocery, will have its last service on Sat., June 1.

The restaurant has been quiet about the close, posting a small button on its website's homepage that notes the space will still be available for events. Head to the basement hideaway this weekend and toast goodbye to the restaurant with tacos and margaritas. 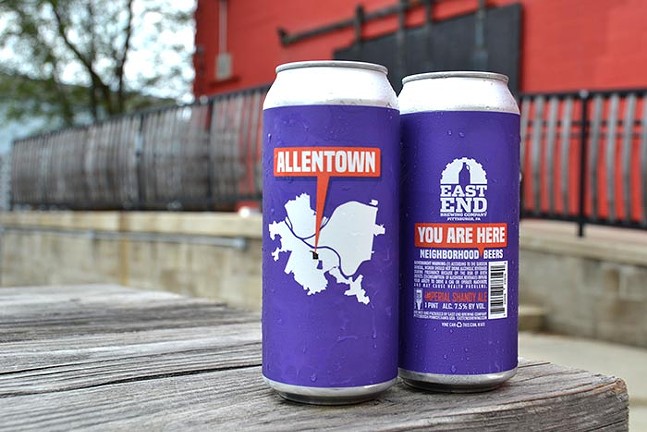 East End Brewing is paying tribute to Pittsburgh the best way it knows how — with beer.

This Saturday, the brewery is launching its “You Are Here” series, featuring a brew named after each of Pittsburgh’s 92 neighborhoods. It's starting with Allentown, an imperial shandy ale brewed with local tea and lemon juice.

Allentown was chosen to kick-off the project because of its design partners, Commonwealth Press, who are opening a warehouse in the neighborhood this weekend. Commonwealth designed East End’s logo and continues to create art for its cans. From now on, the neighborhoods will be chosen at random, picked from an East End growler.

Next up is Overbrook, which will be a hoppy session pale ale.

“I think people like Pittsburgh,” laughed brewery owner Scott Smith, touching on the huge response to the upcoming release. Already, Pittsburghers have been sending the brewery suggestions for what their neighborhood brew should include.

With 92 new beers to make — yes, all of them will be new recipes — there’s no telling when the series will be finished. East End is planning to rearrange their typical brewing schedule to accommodate, but the staple brews will always be around.

Allentown will be available at both the Larimer brewery and Strip District tap room in addition to the Commonwealth grand opening and Allentown night market on Sat., June 1.

The base is Spoonwood’s stout recipe, using dark-roasted grains and caramel malts. Then, 40 pounds of the bakery’s cake is added in, along with raspberry purée.

If you’re not a fan of beer, look for the cake version of the brew on shelves at Bethel Bakery starting June 1. The same chocolate cake used in the brew will be covered in raspberry buttercream, chocolate ganache, and fresh raspberries.

The stout will be sold at Spoonwood Brewing and on tap at multiple local restaurants, including Carson Street Deli, Breakneck Tavern, and Dad’s Monroeville.

The popular ice cream shop is finally giving Pittsburghers a chance to indulge outside of PNC Park. No more waiting in long stadium lines. This week, pints from the Washington farm will be available at six different Giant Eagle locations.